A large shorebird with black and white contrasting plumage and slightly upturned beak, the identification of the Pied avocet (Recurvirostra avosetta) is relatively easy. It belongs to the family of Recurvirostridae.

Its diet consists of benthic invertebrates (aquatic organisms living at the bottom of the water, such as crustaceans or molluscs) and chironomid larvae.

The nesting area of ​​the Pied avocet in France includes three main areas: from the Gulf of Morbihan to the Gironde estuary, from Bouches-du-Rhône to Aude, and from Normandy to Nord-Pas-de -Calais.

It breeds in colonies in coastal wetlands. The habitats sought have sparse vegetation and shallow waters dotted with islets or bunds. On the Atlantic coast, the Eurasian Avocet mainly occupies environments shaped by humans for its reproduction, notably the salt and salt marshes.

Adult birds are present at nesting sites from March to late August, the spawning period extending from early April to July.

In winter, the Pied avocet forms large groups gathered in a limited number of sites. During this period, the species frequents the bays and estuaries of southwestern Europe, the Netherlands and England to Spain and the west of Africa. The breeding population of the region however seem to remain in increasing proportion in France during the winter. 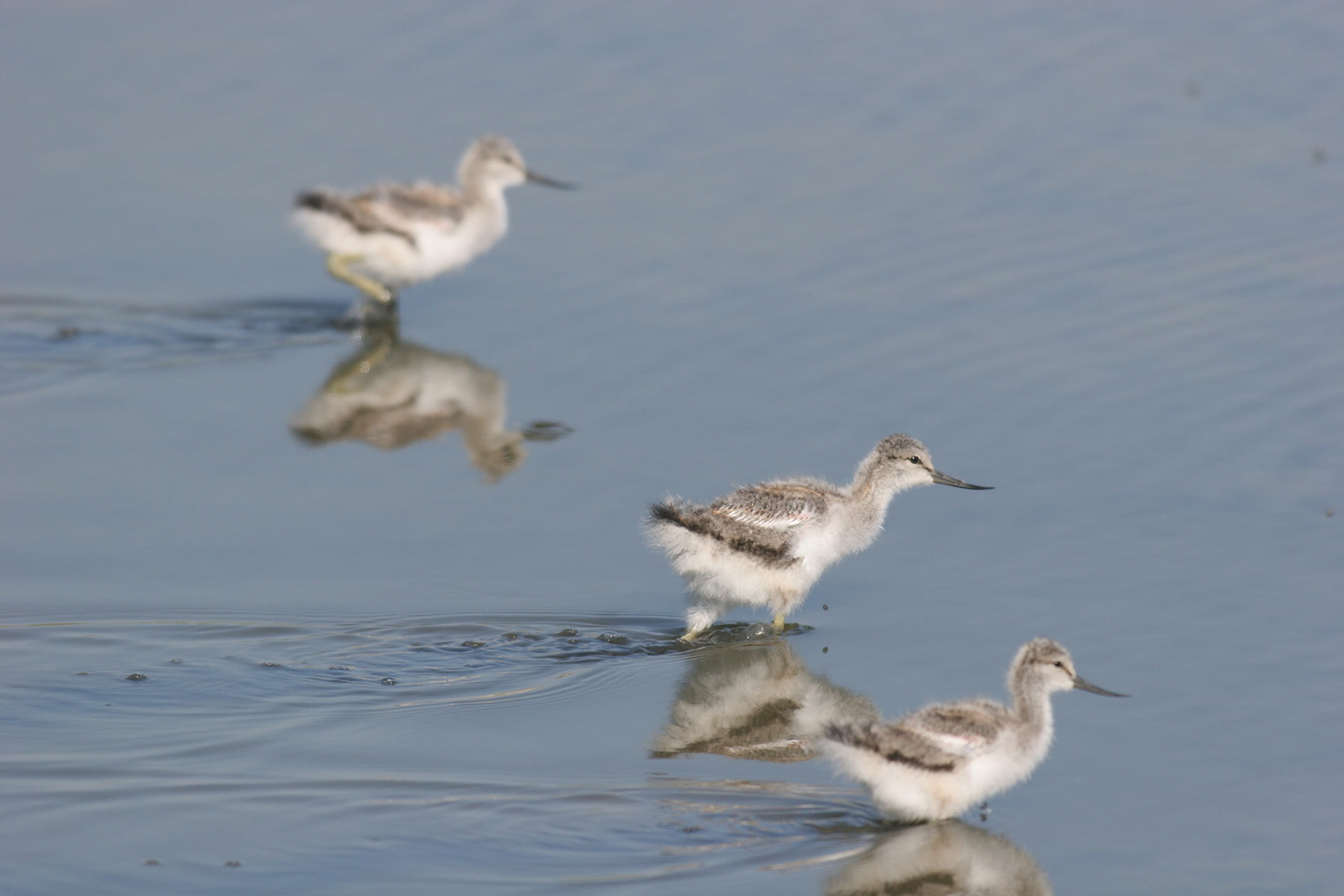 The species is protected in France and listed in Annex I to the Birds Directive and in Annexes II to the Berne and Bonn Conventions.

In wintering, the Bourgneuf Bay and the Marais Breton welcome nearly 1,200 individuals and the Guérande and Mès marshes over 1,300 birds, out of the 20,000 individuals remaining in France (ONCFS, 2018).

The conservation status of the Pied avocet is considered stable in the LIFE Sallina territories. However, the number of nesting sites being more and more limited, it is important to maintain and improve them.

The threats to the species in the salt and salt marshes of the Pays de la Loire mainly concern the nesting and rearing of chicks. Indeed, when it nests on exploited salt pans, the species is particularly subject to nest predation by terrestrial mammals (Least weasels, Red foxes) and everywhere by corvids (Eurasian magpie, Carrion crow). On the contrary, when it nests in basins without hydraulic management, variations in water levels (following stormy rains for example) can cause nests to drown.

The LIFE Sallina aims to improve the nesting conditions of the Pied avocet through the creation or restoration of nesting islands accompanied by fine hydraulic management of water levels.

Why this species is targeted by the LIFE program ?

The different phases of the Pied avocet development cycle are closely linked to the lagoon habitat of salt and salt marshes and its management (during nesting and wintering periods or for feeding).

In addition, in addition to providing nesting sites for the Pied Avocet, the nesting islands created or restored in the basins also make it possible to diversify the lagoon habitat by creating shallow areas and feeding or refuge for benthic fauna.

Thus, acting on one necessarily has an impact on the other, hence the importance of integrating the Pied Avocet and the lagoon habitat into the LIFE Sallina.

Finally, the Pied Avocet can be described as an “umbrella” species: the actions implemented within the framework of LIFE Sallina to preserve it will also benefit other nesting species in salt marshes such as the Common Tern (Sterna hirundo), the Black-winged stilt (Himantopus himantopus) or the little ringed plover (Charadrius dubius).