The Dark spreadwing (Lestes macrostigma) is a dragonfly belonging to the Lestidae family of which it is one of the largest representatives in France. This dragonfly with a thin and robust body is blue. It is distinguished by its “pterostigmas”, dark cells on the upper wings. As its name suggests, these pterostigmas are long until covering 4 cells, which differentiates it from other neighboring species.

This species is known in France on the Atlantic and Mediterranean coasts as well as that of Corsica. In the LIFE territories, the Dark spreadwing is generally located on old salt marshes. These marshes have retained the initial forms (shallow basin, flat, relief of bunds, clay bottom) from their salt past.

The laying occurs mainly in the stems of Bulrush (Bolboschoenus maritimus) and occasionally of Sea rush (Juncus maritimus). The Bulrush is salt tolerant in the substrate. Most of the sites are supplied with rainwater, the impluvium operation guaranteeing desalination in winter and a dry season, late enough to allow the emergence of adults from mid-May to the end of June. The larvae therefore mainly frequent these temporary brackish water environments, the salinity of which increases as summer evaporation takes place. This young lady is very rarely encountered in fresh water.

In France, its flight period extends from May to August.

The Dark spreadwing is a carnivorous predator. Whether during the larval or adult phase, its diet consists mainly of insects. 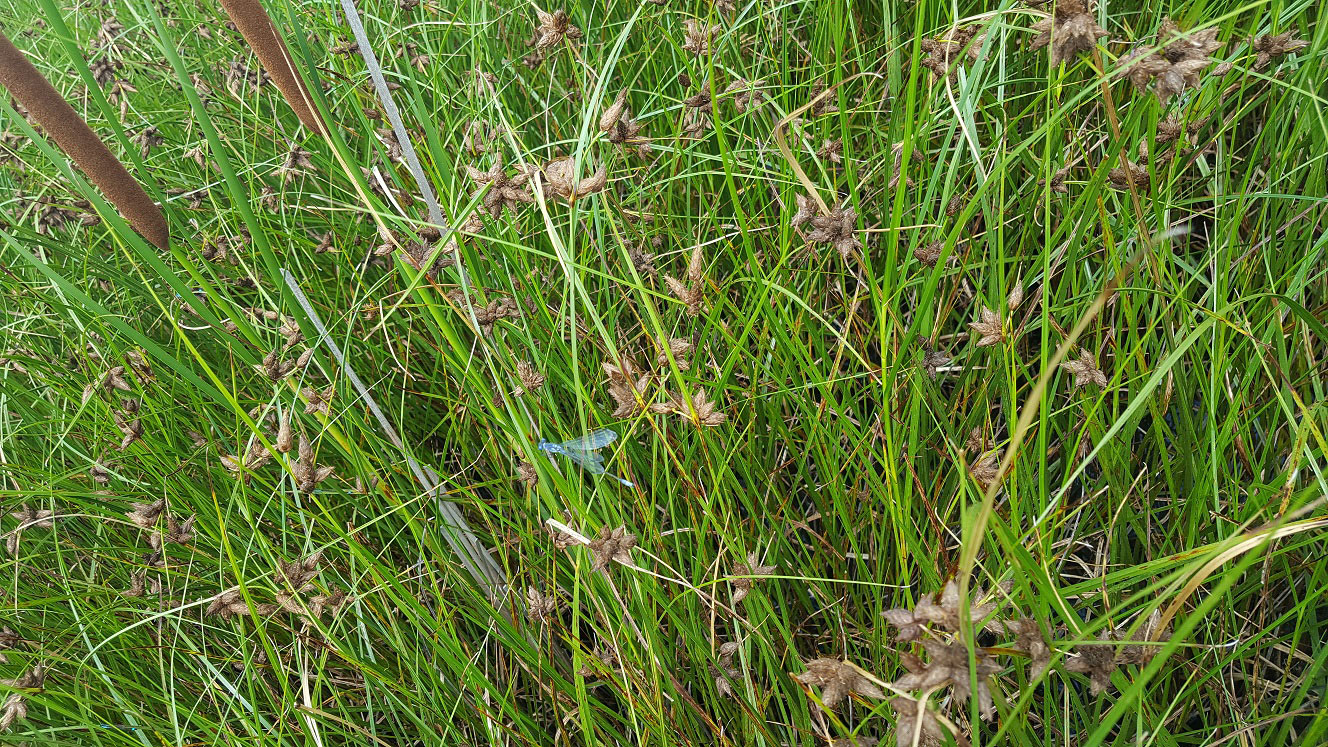 Although the Dark spreadwing is not protected in France, nor registered in the Habitats, Fauna, Flora directive, it is nonetheless a species with strong heritage value.

The species is included in the European Red List of Threatened Species where it is classified as “Vulnerable”.

The species is also included on the red list of threatened species in France where it is classified as “Endangered”.

The Dark spreadwing is also one of the species listed in the National Action Plan for Odonates (PNAO).

In the Pays-de-la-Loire region, the largest population is today observed on the Île de Noirmoutier. A study carried out in 2019 as part of LIFE Sallina, showed the presence of only 5 stations. The two main stations are located on the National Natural Reserve of the Müllemboug Marshes and the Oudinières marsh, two sites subject to conservation measures. In 2019, nearly 1,500 individuals were counted.

In Loire-Atlantique, the last observation of the species dates back to 2007 on the salt marshes sector from Careil-Mouzac to Guérande. It has not been observed since, despite research conducted in 2019 as part of the LIFE Sallina study on the belt ditches.

The Dark spreadwing with great stigmas is greatly threatened by the disappearance of its habitat. For the scirpaies developed on old abandoned salt works, a brutal re-connection with the salt network is unfavorable both for the plant and for the larvae of the Dark spreadwing. Similarly, the passage into fresh water is not suitable for the species. Optimal salinity conditions are therefore difficult to find. There are other threats to the species, such as overgrazing, which is causing the scirpae to decline, or the proliferation of invasive alien species and the use of pesticides.

Several actions are planned in LIFE in order to improve knowledge of the species and the environment in which it is subservient. The first is a knowledge improvement study that will aim to map and characterize the scirpaies on the island of Noirmoutier. This study will also consist in remaking an inventory of the workforce of Leste on the island. The recommendations from this study could be transposed to other territories where the environment is still present in order to encourage their recolonization by the species.

At the same time, the Community of Communes of Noirmoutier Island will also monitor Dark spreadwing and Odonatas in general on all of the LIFE pilot sites on Île de Noirmoutier. All of this work will ultimately improve the state of knowledge on the living conditions of Dark spreadwing in order to promote conservation actions for the species.