In order to achieve the ecological restoration objectives on the pilot sites identified in the LIFE Sallina project, restoration or management actions are planned. They require the agreement of the landowners and, if applicable, the users of the plots concerned.

A property development approach was put in place to inform these owners of the LIFE Sallina project. These owners are invited to formalize their adhesion to the project and their involvement by signing a 12-year agreement (15 years on the marsh of Millac). This agreement has three objectives:

In order to preserve the biological richness of the marshes in the long term, long-term leases can also be offered to the landowners. By this document, the management of the plots can be entrusted to a managerial structure (Conservatoire d’espaces naturels des Pays de la Loire (CEN), manager of natural areas …). The commitment can go up to 99 years.

On Noirmoutier Island, the Community of communes can also buy from voluntary landowners.

The agreement with the owners is a mandatory condition for the implementation of restoration and management works. It will cover a period going beyond the duration of the LIFE project and will therefore ensure the long-term preservation of the targeted marshes.

In the Presqu’ile de Guérande, land development is led by CEN Pays de la Loire, in agreement and consultation with stakeholders in the marsh and other land stakeholders (Conservatoire du Littoral, Department, agricultural land group, etc.) .).

Started in 2019, the land development activity allowed to meet a large part of the landowners. Strong support for the LIFE Sallina project was obtained, and no less than 46 owners (private and public) have already signed up to an agreement. However, some difficulties are encountered in contacting all the owners, in particular unresolved estates. Steps are underway with notaries or municipalities to be able to move forward with the animation.

All of the owners were contacted from the start of the project, several times to explain the LIFE approach to them. A project presentation meeting was also offered to the owners. Some difficulties are encountered in contacting all the owners.

In 2019, a marsh plot (52a 40ca) was acquired by the Community of Communes of the Island of Noirmoutier on the pilot site of Boucaud.

On this site, land management is carried out by the Syndicat Mixte de la Baie de Bourgneuf and SAH Sud Loire. Agreements are signed each year between the owners and the SAH for the basins undergoing work.

Among the owners involved we note the League for the Protection of Birds of Loire-Atlantique, the Department, an oyster farmer who left available 6 tanks for the project and 10 other individuals

A larger property development campaign was conducted in anticipation of Life in 2016, during which several owners had declared themselves sellers. The Department will be the land operator for this territory with the definition in 2019 of a Preemption Zone under Sensitive Natural Spaces with a sector where the right of preemption has been delegated to the municipality of Villeneuve-en-Retz.

Since most of the targeted salt / salt marshes have been fallow for years, there is little salt or farming activity on the LIFE Sallina pilot sites.

However, on certain sites restored or managed within the framework of LIFE Sallina, salt workers or salt workers are engaged in the restoration of salt works.

These practices are encouraged by LIFE Sallina through agreements such as rural leases with environmental clauses. These contracts are offered to owners and operators in order to guarantee the implementation of practices fully compatible with the various ecological challenges. For example, the operator undertakes to respect the nesting dates of the birds for his interventions, to manage the water levels in winter, to maintain the slopes to protect natural habitats, to maintain the nesting islands if necessary …

Other activities are also present on the marshes, shellfish farming and hunting. This diversity gives rise to different management methods, bringing together diverse environments and in which welcoming biodiversity is sought.

This action will be carried out in partnership with an integration structure and with the technical support of local salt production structures. Salt-producing marshes will be made available to this structure in order to carry out manual restoration sites. This social action will allow workers to train in manual restoration of marshes and may ultimately create a vocation for the installation of future salt farmers on the island’s marshes.

These marshes will also serve as a witness site to inform the salt industry, the school public and the general public about the LIFE project.

This approach has already been initiated on the Doridon marsh in partnership with the ESNOV integration site and the Salt Cooperative of Noirmoutier. A salt marsh with 18 carnations is being restored. A preliminary manual work was launched to trace and stake all the structures of the marsh (body of carnations, clothes / bridges …). A mechanical restoration was carried out to facilitate the work. The recovery of bridges and funds is then done manually. 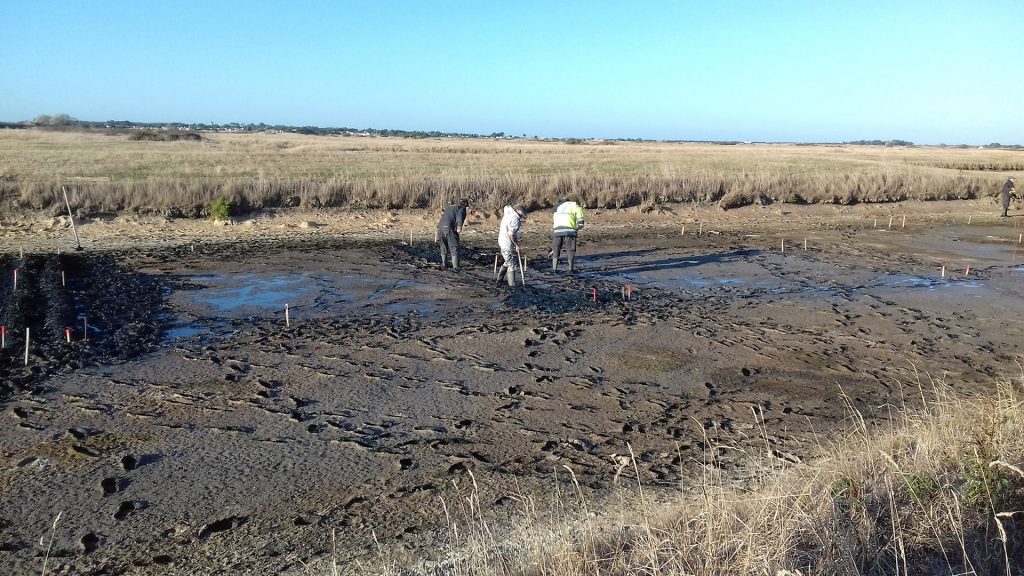 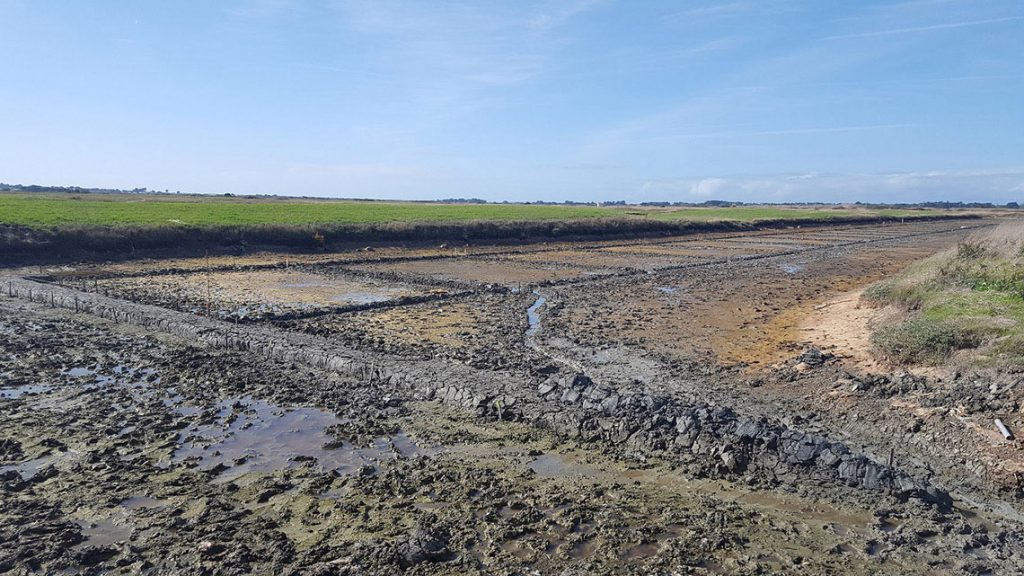